Creative Educational Actions at the KESPEMs

In addition to the classes, the KESPEMs organize events, pedagogical workshops, and various actions that rely on the imagination and creativity of children and offer them a fun and especially productive way to knowledge and to the cultivation of their capabilities.

As the school year now comes to an end, the KESPEMs open their doors to parents, pupils, and friends, and present the educational work that has been done throughout the previous months. In all the KESPEMs, the visitors will have the chance to talk to pupils and teachers, to see the work accomplished by these centers and to have a look at the exhibitions of works created by the pupils. The "open days" will take place from June 12 to 22, 2014.

On May 30, 2014 the KESPEM of Droseró organized with great success a celebration with the theme "the world belongs to us". In this celebration, the children, together with their teachers, presented to their parents and to all the guests the activities they have carried out and the works they have created in their classes throughout the school year which is about to end

The invitation to the celebration

"A celebration at the KESPEM of Droseró", The news story of the even on Channel 6

On Saturday, May 17, 2014 an information session about study choices in higher education was conducted at the KESPEM of Xanthi, by the head of the Counseling and Orientation Center (KESYP) of the city, Mr. Georgios Bakalidis, for 12th grade pupils who are going to take the university entrance exams. Twenty pupils who attended the classes of all concentrations/directions at the KESPEM since the start of the school year, together with their teachers who were also present at the session, received answers to their queries for the university departments which they considered to choose, the scientific fields of study, and also on how to complete their computerized forms where they list the departments to which they wish to be admitted. A month before, the pupils had themselves drafted a list of the departments they were interested in, and written down the points they wished this information session to concentrate on.

On 12/21/2013 the 6th grade pupils attending the classes and activities of the KESPEM of Ehinos organized a festive surprise for their teacher. They took the initiative to throw a small party with a cake, music and dance. They all wished, to their teacher and to themselves, a creative and happy new year.

On March 9, 2014, the class sections of the KESPEM of Ehinos, in cooperation with the Minority Primary School of Ehinos, organized a small celebration. Parents and children packed the hall of the school where the celebration took place. Male and female pupils of the KESPEM staged small theatrical plays, presented recipes for sweets, danced, had fun, and renewed their commitment to participate in the KESPEMs' educational activities that continue.

The curtains fell for a final time at the Avlea hall of the KESPEM of Komotini with a celebration -- a party -- organized for the young pupils attending the KESPEM classes and activities. The party took place on February 28, as part of the (carnival-related) general festive atmosphere, and upon the wish of the children themselves. With the guidance of the youth workers of the Creative Workshops for the Youngsters and the KESPEM staff, the children made masks and decorations, danced and had fun. Many parents, who accompanied their children and were visibly proud of them, attended the party as observers.

A special viewing of the documentary entitled "The Other Town," produced by Hercules Millas and Nefin Dinç, took place on Friday, February 21, 2014, at the "Avlea" hall of KESPEM of Komotini. The audience comprised of Project staff members, many viewers from the Minority and the Majority, and there was a strong attendance of students from the Democritus University of Thrace. Hercules Millas, who was present at the event, moderated a lively and interesting post-viewing discussion and answered the questions of the audience.

The film "We Form Teams – We Build Friendships", which was created within the framework of a European Union project entitled "Prosociality Sport Club – Prosociality for Integration and Multiculturalism," and by pupils from the middle school of Smínthi and the high school of Gláfki, under the coordination of Ms. Alexandra Kítsou, a physics teacher, was screened on February 6th at the Avlaia hall of the KESPEM of Komotini.

The film presents the common experiential, educational, and sports activities that were carried out by the participating schools, as well as the experiences of pupils throughout the duration the European project "Prosociality Sport Club".

The methodology of the project is based on the development of positive attitudes and initiatives among various social groups, and of the sense of personal responsibility for the common good. Its goal is the promotion of universal human values and processes, such as socialization, interaction, cooperation, empathy, acceptance of differences, unity, and respect.

During the screening at Avlaia, the coordinator of the project, Ms. Alexandra Kítsou, and pupils from the middle school of Smínthi and the high school of Gláfki shared with the audience their enthusiasm for this rich and fruitful experience.

Coverage of the event by the local press:
http://www.paratiritis-news.gr/detailed_article.php?id=165028&categoryid=6
http://www.xronos.gr/detail.php?ID=91763

On January 30, 2014, the KESPEM of Komotini organized a special screening for children of the animated movie “Ratatouille” at the “Avlaia” hall. The audience comprised of 50 male and female pupils of pre-school age, and 20 mothers who were accompanying them. The children watched the movie with great attention and seemed to be enjoying it.

In January 2014, the KESPEMs of Xanthi, in cooperation with the "Centers for the Prevention of Addictions and the Promotion of Psychosocial Health" of OKANA ("Organization against Drugs"), organized four counseling meetings with male and female middle school pupils who attend the classes at the KESPEMs of Xanthi. The meetings were held with the help of the staff from "Ekfrasi" ("Expression") a prevention center in Xanthi, on 01/14, 01/18, 01/22, and 01/24. Their purpose was to empower the youngsters by informing them on how to use the Internet safely and on how to avoid the development of addictive behaviors related to Internet use.

On Friday, December 20, at the "Avlaia", the children of the KESPEM of Komotini celebrated the end of 2013 and the coming of 2014. 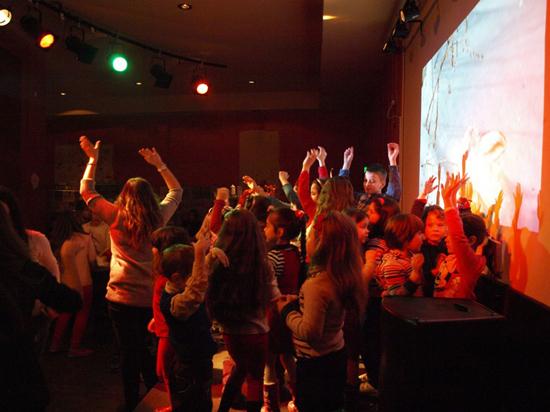 The children, the teachers, and the DEN staff created a very warm jolly atmosphere. More than 80 pre-school-age, primary- and secondary-school children came together, prepared festive decorations, danced, tasted pies and kurabiyes (sugared buns) -- and had a lot of fun. They shared their joy with about 60 adults, mainly mothers, who celebrated together while enjoying their coffee.
At the end of their celebration they all wished that this fun and the same optimism accompany them throughout the year 2014.

Like every year, this year too, from May 31st to June 10th, the KESPEMs organized with great success festivities to celebrate the end of the school year and the completion of the classes. These festivities have become some sort of a tradition, and children who attend classes at KESPEMs look forward to them with great anticipation and excitement.

Children at KESPEMs began several weeks beforehand to plan, and prepare together with their teachers, their participation in the festivities, while at the same time designing with creativity and imagination the invitations to be sent to their parents.

At the festivities, children gave the presentations they had prepared, guided their parents with pride and joy through the exhibition displaying the artworks that they made throughout the year, played at educational activity corners with toys that they themselves had made, sang, danced, and had fun.

Especially memorable in this year’s festivities was the participation of the children who had attended the Career Counseling activities: They presented the magazine they had created through the cooperation of all the Career Counseling groups of Xanthi and of Rhodope.Alongside the children, groups of adults who attended Greek language classes also took part in the festivities.

The manifest joy and pride at the festivities gave everyone who attended them -- parents, teachers and all the Project staff -- a sense of accomplishment and optimism.

On the weekend of December 1-2, 2012, the “stage” of Komotini’s KESPEM hosted an action based on the products of the initiative “Videomuseums, Our Own Opinion”. Within the framework of this initiative, pupils shoot and produce short films, and a selection of these films is shown to pupils throughout Greece.

The screening of the films was attended by 72 primary, secondary, and high school pupils, who awarded some films with original distinctions. These distinctions were not judgments on the general value of the film, but were answers to questions like “which film did I like a lot and would like to show to a friend of mine?”, “Which film was unusual and can generate a discussion?”, “Which film, in my opinion, would my parents and my teachers like?”. 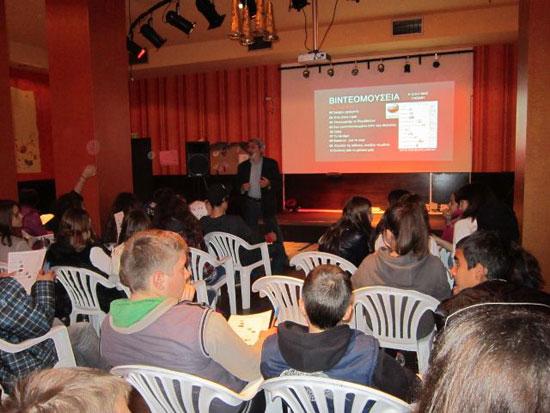 Further info on the Videomuseums.
The results of the “Our Own Opinion” voting that took place at the KESPEM of Komotini will be posted on the Internet, alongside the opinions of many other pupils from throughout Greece.

The Project marked the completion of its educational activities in school year 2011-2012 with a number of celebrations that filled pupils, their parents, and all project associates with satisfaction and optimism.

End-of-the school-year celebrations at the KESPEMs.

The KESPEMs of  Selero and of Echinos organized, on Saturday, March 10 and on Sunday March 11, 2012, respectively, a performance piece named “Takis the Little Experimenter and the Secret of the Forest”. In the show, Giorgos Epsimos, a physicist, narrated, in a very lively and interesting way, a tale to the kids, while simultaneously doing physics experiments. Both events were very well received, and enjoyed great attendance by children. 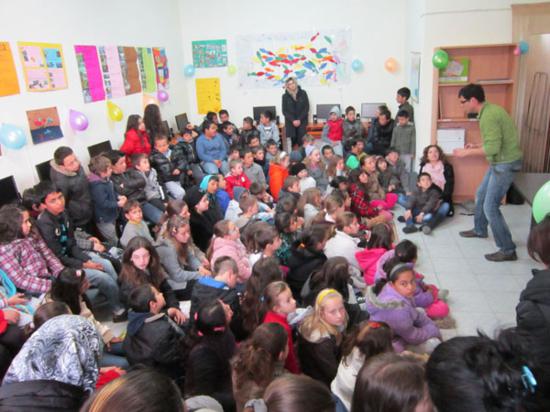 In Selero, about 100 children watched the adventures of Takis the Little Experimenter. The KESPEM of the town was full-packed and the children participated by singing along and were in a very cheerful mood throughout the tale.

In Echinos, more than 50 children attended and they were a very lively audience. It’s worth mentioning that all children stayed until the end of the show, and many of them were visibly amazed at the experiments conducted by mischievous Takis (See Photos).

The KESPEM of Komotini opened its doors and welcomed throughout two days (January 21 & 22, 2012) children and parents from the Minority and the Majority. The central theme of this activity was “the five senses” and included one imaginary voyage through a fairy tale for each of these senses, and something more: A big walk in an imaginary forest, full of experiments for those who are (or feel like they are) 4 to 10 years’ old. There were also many “kids’ corners” set up for the creative participation of children. 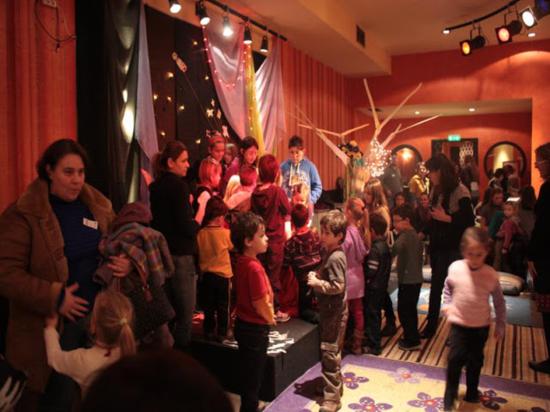