The compensatory educational interventions organized by the Project at minority primary schools and at public primary schools with a significant percentage of minority pupils, began in the 2010-11 school year. The goal of these actions is to strengthen minority pupils’ competence in Greek, to improve their self-image, to remove the barriers to good performance for all the pupils, and to enhance their motives to continue their studies in higher levels of education.

The Compensatory Classes, the main component of these actions, take place either after the regular school day, in the afternoon hours, or on weekends. The teachers who assume the responsibility to teach these classes are in a constant training process.

The schools where these classes are organized are supported by the Project with additional equipment (personal computers, photo cameras, color printers), with stationery (office supplies), and with many extracurricular books, selected in such a way as to appeal to different age groups. With regard particularly to the use in class of literary books for young ages, teachers are supported through training meetings, where, by way of  experiential workshops, they learn how to benefit from them creatively, whereas for  the use of books for older ages teachers are also helped by the support materials posted on the web-site of the Project.

The classes are coordinated on site by the principals or the vice-principals of the schools.

The 2013-14 School Year
Compensatory classes for this school year began gradually in October at 16 primary schools (12 Minority and 4 public schools) in the Rhodope & Xanthi prefectures. Most of these schools had participated in the actions of the Project in its previous phases. In total, 842 children were registered to attend this year's compensatory classes.
Click here for further details

Ceremonies for the Completion of the 2013-14 Classes
Ceremonies marking the completion of the Compensatory classes took place from May 27 to June 16 in all the schools where such classes (attended in total by 837 pupils) were organized by the Project in the 2013-14 school year. In the ceremonies, pupils presented the work they had done within the framework of the compensatory classes.
Click here for further details
Click here to see a video from the completion ceremony at the Myki Minority Primary School

Summer Classes
From June 23 till the end of July, summer classes are to take place at 8 Minority primary schools (at the schools of Mastanli, Lykeion, Arriana at the Rhodope prefecture, and at the schools of Sminthi, Glafki, Kentavros, Sounio and Myki at the Xanthi Prefecture). In total 247 pupils have registered to attend. There are three types of classes that are offered in the summer period: (a) The classes for the pre-school children, that consist of play-like and creative activities through which the children get acquainted with the Greek language, while at the same time familiarizing themselves with the place of the primary school, where they will soon be going, and thus get ready for the first grade. (b) The classes offered for the kids who have just graduated from primary school, which prepare them in a systematic way for the secondary (middle) school and help them familiarize themselves with the language and the terminology in various school subjects. And (c), the classes offered to children of all the other grades, which give them opportunities to study, in a creative way, books and other types of texts, and thus to improve their comprehension and production skills in written and spoken Greek.

This year there are 19 schools who are participating in the Compensatory Classes program, 6 of them in the Rhodope prefecture, and 13 in the Xanthi prefecture. Of these 19 schools 14 are minority schools and 5 are public schools attended by a large number of Minority pupils. Most of the schools participate in this program for a third consecutive school year. The Compensatory Classes are attended by 959 pupils in total.  Further information.

The time period from June 25 to - and including - July 1st marked the beginning of the summer classes at 8 Minority primary schools in total, 3 in the Rhodope prefecture and 5 in the Xanthi prefecture. The classes, which are being attended by about 380 children, are intended for (a) pupils of all primary school grades, (b) for kids who are going to be starting kindergarten or first grade, and additionally (c) for pupils who have graduated from primary school and are heading to secondary (middle) school.

“Closing ceremonies” were organized in June 2012, at the end of the 2011-12 school year, to mark the completion of the Compensatory Classes that took place in 18 primary schools and were attended by 1107 pupils. (Click here to see further details about these ceremonies)

Throughout the month of July (1-31) of 2012, the Project organized repeat classes and preparatory classes for the next school year. These classes were attended by 412 primary school and kindergarten pupils.

The Compensatory Activities began on February 3rd, 2011 and took place at minority primary schools of the Rhodope and Xanthi prefectures. (Further information.)

From June 15 to June 19, 2011, The Project organized events/ceremonies to present the work done in these classes throughout the winter season (from February till June) in almost all the schools that took part in the Compensatory Education program.

Click here for information on these events to mark the end of the Compensatory Classes and for photos from these events.

From June 30 to July 31, 2011, summer classes took place at 9 minority primary schools in the Rhodope and Xanthi prefectures. These classes aimed at strengthening minority pupils’ competence in Greek, and also at preparing these pupils (by providing them with educational support) for the next school year. Further information. 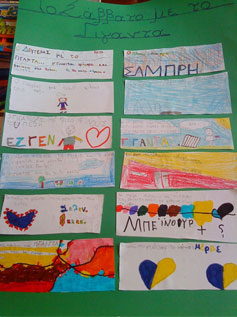