The Thrace that you don’t know – Narratives of an educational change with words and notes.

The event dedicated to the fifteen years of the Project for the Education of Muslim Minority Children was held with great success on Friday, March 29, 2013 at the Ianos bookstore, in Athens. The speakers in the event, which was facilitated by the well-known journalist Pavlos Tsimas, were: Marietta Yannakou, a member of the European Parliament, Kostis Papaioannou, the head of the National Committee for Human Rights, Şerife Sirak, a student at the department of education of the Univ. of Athens, and Prof. Anna Frangoudaki, the scientific director of the Project. Addressing a fully packed hall, the speakers underlined, each from his/her own point of view, the significance of the project’s outcomes achieved in its fifteen-year span. The event ended in a cheerful and moving atmosphere with the music of Balkanatolia, a band from Rhodope, consisting of members from the Minority and the Majority.

The Opening of the KESPEMs

The public opening ceremony of the central KESPEM in Xanthi took place on Thursday, November 10, 2011, and that of the central KESPEM of Komotini on Friday, November 11, 2011. About two months later, on Friday, January 13, 2012, the KESPEM of Alexandroupolis, on Avantos Street neighborhood opened its doors with a similar ceremony. This KESPEM was set up in the framework of cooperation between the Project for the Education of Muslim Minority Children of Thrace and the Municipality of Alexandroupolis. 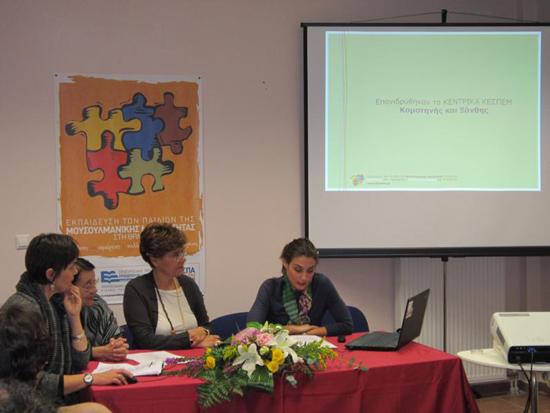 A press conference followed the opening ceremonies in each of these cities, while the ceremonies themselves attracted widespread participation that included representatives of teachers’ unions, local authorities, and, of course, teachers, parents, pupils, and the associates/employees of the Project.
Further information

Participation of the Project in “Thrace 2011”, A Nation-Wide (“Panhellenic”) Trade Fair

On May 27-29 2011 the Project for the Education of Muslim Minority Children in Thrace participated with its own stand (No. 68) in the 20th Greek Nation-wide (Panhellenic) Trade Fair called “Thrace 2011”. The fair took place in Komotini, at the International Expo Center of Eastern Macedonia-Thrace, with the participation of 120 exhibitors from Greece and from abroad that presented their products and services. The trade fair opened on May 27th, by the then Deputy Minister of Interior, Decentralization and Electronic Governance and also the Government Spokesperson, Mr. Yorgos Petalotís, and in the presence of the then Alternate Minister of Regional Development and Competitiveness, Mr. Sokrátis Xynídis. The President of the Republic, Mr. Károlos Papoúlias, and regional authorities and institutions sent congratulatory messages.
(See further information) 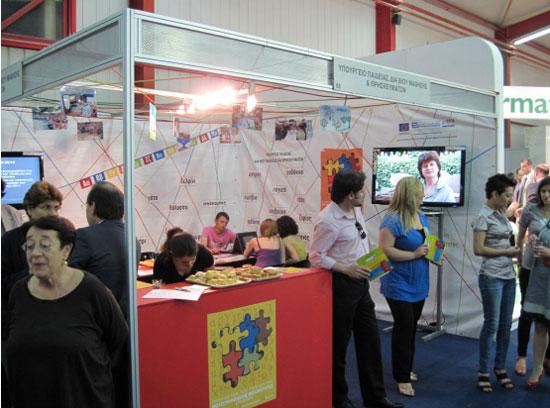 An Event on the Compensatory Educational Actions Within and Outside School for the Minority Children – in Komotini, on June 9, 2011

On the occasion of the end of the school year and the completion of the actions of the Project for the 2010-2011 period, an information event entitled “Compensatory Educational Actions Within and Outside School for the Minority Children” was organized in Komotini, on Thursday, June 9, 2011. In this event, the associates of the Project in charge of each action presented (a) their work that was done in primary and secondary education, and also (b) the training of teachers that was carried out in parallel with those actions. Salutations were addressed by: A representative of the Regional Governor, the Head of Scientific and Pedagogical Guidance Office, Mr. A. Kouroumihakis, and the Coordinator of Minority Education, Mr. N. Papageorgíou.

Public Screening Events of the Documentary “Addition, Not Subtraction; Multiplication, Not Division: Another Education for the Children of the Minority in Thrace”

The documentary “Addition, Not Subtraction; Multiplication, Not Division: Another Education for the Children of the Minority in Thrace” was presented to the public in series of screening events. The documentary, with a running time of 75 minutes, directed by Thanos Anastópoulos, examines the ten-year path (1997-2007) of the Project for the Education of Muslim Minority in Thrace.

The first public screening took place in Athens, at the Greek Film Archive (Cinémathéque), on March 14, 2011. The screening event started with an address by the then Alternate Minister of Education, Ms. Fófi Yennimatá.

Right after the screening of the documentary, there was a discussion session, in which Mr. Pantelís Kapsís, a journalist, Mr. George Moschos, the Deputy Ombudsman for Children’s Rights, Mr. Dimitris Brátis, a teacher and former president of the Primary School Teachers’ Federation of Greece (DOE), Mr. Gazment Kapllani, a writer and journalist, Mr. Pavlos Haramís, an educator and chairperson of the Center of Research & Documentation of the Federation of Secondary Education Teachers (OLME), and Ms. Katerina Schiná, a book critic, served as commentators.

This event was followed by three similar public screenings of the documentary in Thrace, on the 10th, the 11th, and the 12th of May, 2011, in Alexandroupolis, Komotini and Xanthi, respectively. After the screenings in all three cities, panel discussions were held, in which representatives of local authorities, representatives of teachers, artists, intellectuals, and journalists commented on the documentary extensively. All participants in these panels mentioned the positive work that was accomplished by the Project.